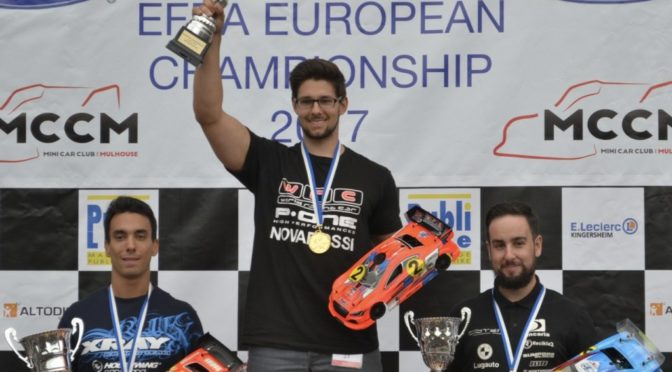 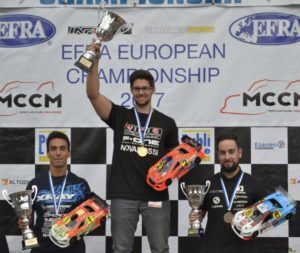 That it was the racing at the 2017 EFRA IC Track 1/10th European Championships that made the headlines was a story in itself. Unseasonal wet weather on Thursday and Friday would have seen many events either struggle to get finished, or not take place at all. Fortunately a track at Mulhouse that dried relatively quickly and, more importantly, speedy and thoughtful intervention by Javier Garcia, the EFRA Delagate at the event , including a smart decision to move two qualifying rounds to Wednesday when the conditions were perfect, ensured no racing was lost. Remarkable as Thursday was rained out until 16:30 and the time set aside on Friday for the lower finals was also lost to weather.
So all of the finals would have to be run,  ‘wet or dry’ on Super Saturday. Action began spot on time at 8am.  The track was damp so the first 2 races were declared ‘wet’ making tyre choice, which for dry running was mandated as a single, controlled, Capricorn compound, free and also allowing a wet chassis if one had been through tech inspection.
The conditions were treacherous and as drivers arrived for the later finals there was much discussion about how they would attack, or merely survive the conditions.  After a dull and cold start the weather played ball (almost) all day and there was superb competition  throughout the lower finals in the A event with the B Event Semis and B Main also adding action and excitement to the proceedings.
Whilst there was close racing and last-gasp passes in all of the ‘supporting’ events, the A Main provided a fabulous finale to the week.
Bruno Coelho was red hot favourite. He topped all but one of the five qualifying sessions. He clinched TQ and direct entry to the A Main by the end of the 4th Q session. The other ‘automatic’ qualifier was Toni Gruber who clinched his place by posting the fastest lap time in Superpole.
Joining them at the sharp end of the grid were A Semi final winners Greiner (the only other driver to top a qualifying sheet) and Leino.
As the final approached a shower of rain damped the circuit and there was no choice but to declare the race ‘wet’ – the organisers making it clear that a single change of chassis would only be allowed before the grid formed.  The shower passed and everyone stayed on their primary choice. In fact everyone used the mandated tyres as well, although there may have been a couple of driver left wishing they had packed something ‘special’ in the race cases.
The drama didn’t end there though. TQ Coehlo couldn’t fire his engine and called a 10 minute technical. The request was barely made when a small piece of debris was found to be blocking the exhaust and, once removed all was well. The damage was done though and he started out of position on the grid. Ultimately this cost him the European title.
From the hooter it was clear that the Germans at the front of the field had very quick cars indeed and theior battle for the lead was intense for the first couple of fuel runs. Although Coehlo was quicker throughout the 45 minutes, it was only marginally so. The contest though was far from boring, or indeed straightforward. Greiner took new tyres early and dropped well back, whilst Gruber went pretty much to half distance before his first four tyre stop.
Coehlo was tantalisingly close and some of the best wheel to wheel racing wasn’t for position per se, but where the main protagonists were scrapping to say on, or get back on the lead lap.
Having a very impressive and well paced run was Edu XXXX withe the Shepherd chassis. A near- flawless run (one of the very few) would net the Spaniard the third step on the podium.
The decisive moment of the race was a stroke of tactical genius from Team Gruber. With Coelo clearly quicker – and having noted the tyre degradation in their first long run – they know they had to do something to be able to defend in the closing minutes. However Coelho had just got back on the lead lap so if they were to keep the Portuguese behind there was no time for a four tyre stop. The decision was made to take just new left side tyres. Even then, the crew could afford no mistakes. It was a perfect stop and meant that after Coehlo made his stop, Gruber held the lead – just. The gap came down to under 4 seconds at one point. The leading pair traded 100ths and 1000ths of seconds lap after lap, including through traffic. The oohs, ahhs and gasps from the sizeable crowd testament to the skill and commitment of the leaders.
In the last stint it was Coelho who started to lose ground, the final margin over 10 seconds as the newer tyres on the left side of the German’s WRC paid dividends.
Bruno Coehlo must be left ruing that debris, the call for a technical and a start from off his wel-earned pole position. But take nothing away from the victor. A brilliant, consistently fast display of driving over 45 minutes of the A Main coupled with faultless tactics and strategy is what won the European championship for Toni Gruber and his team. 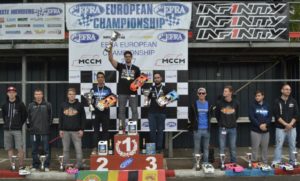 The Full Top tem was –