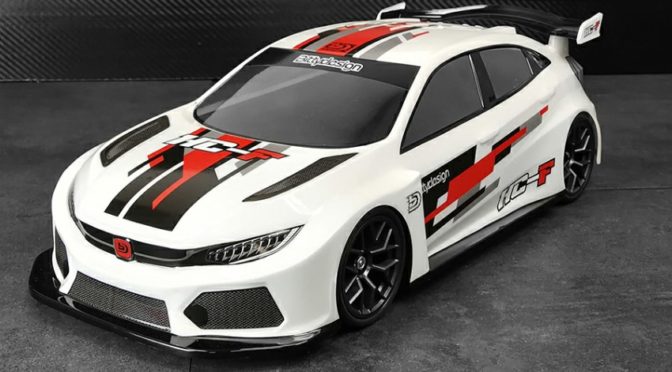 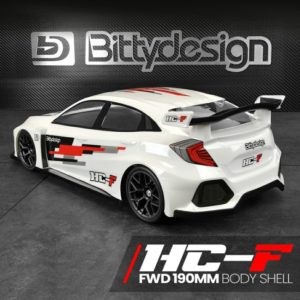 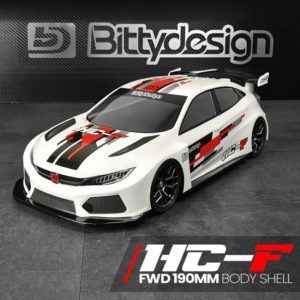 The HC-F project was born from the desire to offer to all the rc enthusiast an new top quality body shell for the growing front wheel drive divison. Tested for several months the product combine a stunning realistic aesthetic together with performance at the top of the class.

The HC-F is designed to win!

Thanks to the collaboration with our experienced European and Asian team drivers we have been able to follow and realize valuable suggestions that have allowed us to adopt some changes to the initial project necessary to greatly improve the driving precision and reduce the rolling of the model caused by the typical high roof of all the FWD body shells.

The design recalls the forms of the „queen“ par excellence of real scale front-wheel drive cars produced in Japan, the refinement phase took several months to optimize every detail, theattention to particulars has been obsessive in order to propose a body that could exalting the performance of the Japanese car at its best.

The body it’s UNIVERSAL and fit all the 1/10 190mm cars on the market; can be mounted on the traditional 4WD touring chassis as well on the the recent all new model car developed by the factories exclusively for the front wheel class (FWD)

In order to respect our quality standards, we have not set any limits and we have realized the HC-F project with the use of the most advanced graphics and Cad design; this process guarantees a perfect execution of the forms and details that high-tech machinery realize with 5-axis CNC milling machines.