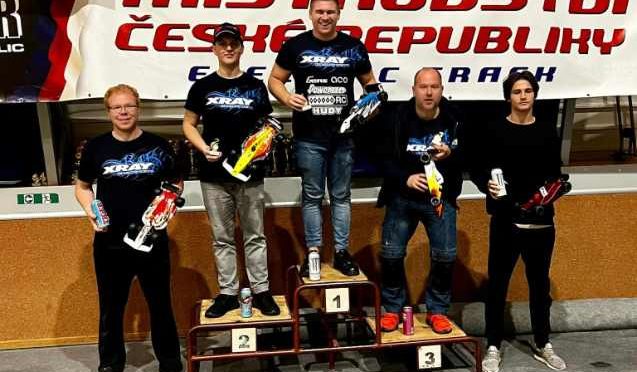 Last round of Czech Nationals in 2022 was held on the past weekend in Jedovnice.

Stock and Formula 1 title was already decided, but modified was yet to be decided on the last race.

In modified Adam Izsay won all 3 qualies in front of Jirka Vysin and Matej Sulc. However in the finals Jirka tried everything he had and won A1 but after Adam was able to win the last 2 finals to take overall at the race and as well the National title in front of Jirka and Matej.

There were 24 participants in stock category. During practice I found out very good setup. Thanks to that I was able to win all qualies and I won TQ. I was started in front of Karel Kratochvil and David Mestan. I managed to win A1 and A2 with a small lead. I had a great battle with Karel in A3. Unfortunately I made a mistake in the last lap and Karel won the last final. My XRAY X4 23 was on the point whole day.

After TQ I was able to win A1 & A2 and win the final round of our national series.

Winning 3/3 races of our nationals shows how strong the package is.

Thank you to all my sponsors for continuous support over the years and I hope we fight again in 2023!