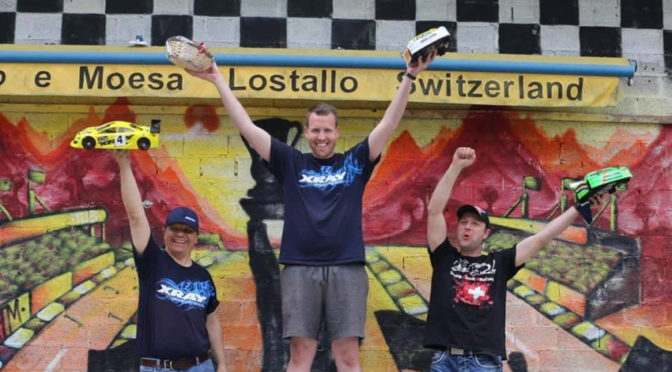 Double victory for XRAY NT1 and FX T300 at Swiss nationals round 1!
The first round of Swiss championship 2021 was held on the famous track at Lostallo.
The weather forecast looked great and we were all excited to race the first time since a long time.

After the free practice I was sitting on P3 behind Kevin Lehnherr and my teammate Traugott Schär. It was not easy to find a good setup on this bumpy and rough surface.

During the qualifications I made some small setup changes and they paid off. Now I was able to fight for the TQ. Kevin won the 1st and the 3rd round, I was fastest in the 2nd and 4th round of qualification. Kevin’s fastest run was 0.3 second faster than mine, so he was the top qualifier. With the fastest laps during the SuperPole, Martin Wenger and Traugott Schär secured the 3rd and 4th spot on the starting grid. With Stefan Wüthrich and my dad Roland we had totally 4 XRAY drivers in the 45 minutes long A-main. 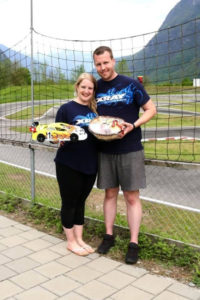 After a small mistake from Kevin, I was able to take the lead in the opening lap. After 10 minutes I had a gap of 9 seconds to Traugott who was sitting on position 2. We were always separated by 7 to 10 seconds until the 35 minutes mark. With fresher tyres (I changed the tyres a few laps later than the other drivers) I was able to increase the gap and I drove to the win ahead of Traugott Schär and Adrian Burren – double win for XRAY NT1 and FX T300!
My FX T300 engine was amazing the whole weekend! I never had an engine like this before!

A big thank you goes to my wife Sue. You did a perfect job in the pits! You did one more time the fastest tyre change of the final! I’m so proud of you!

At least I would say thank you to T+M Models for the perfect support! With your help I’m able to improve my package from race to race!
Now I’m looking forward to the 2nd round of the Championship at Herblingen in 5 weeks. 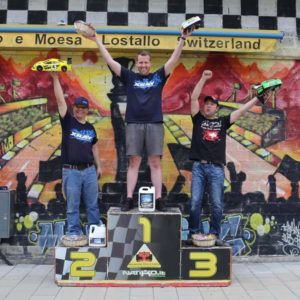