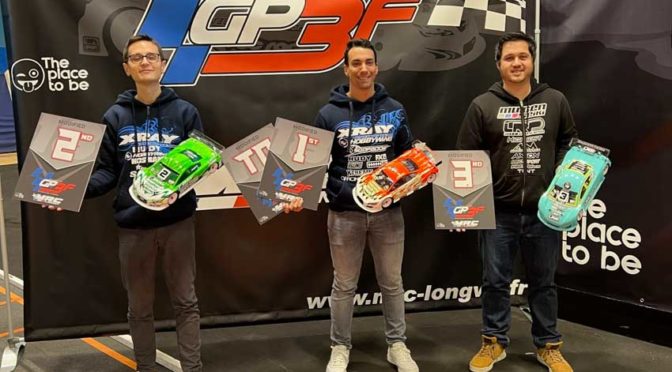 The annual GP3F event was held in the French city of Longwy, close to the borders of Belgium and Luxembourg. The event was sold out at 160 entries. The XRAY team was in full attendance, ready to race it out in each of the 3 categories! As always, the track was spectacular, with a great fast and flowing TC layout. The tire choice for the TC classes this year was the Rush 30, which worked very well.

The race was held over the weekend of 21-22 of January in 2023. We started off with 5 rounds of practice on Saturday morning, before eventually going into 4 rounds of qualifying, where the 2 best results were counted. In the modified class, I held the TQ spot with two wins on Saturday night, but my teammate Bruno Coelho ended up winning Q1 & 4 and was eventually awarded the TQ spot on a tie break due to a better overall time. This meant that we would line up 1-2 on the grid for the triple A-finals.

Bruno Coelho won the first two finals with a small margin to me, who chased him down in both finals. Bruno would secure his first GP3F win in style! I went on to win A3 with a tone-to-tone finish, once again showcasing the dominant performance of the X4’23 car this weekend! Antoine Brunet, Marco Kaufmann and Oliver Havranek also made the A-final in the prestigious modified class, which meant that XRAY had 5x cars in the top 10!

In the competitive stock class, our French team driver Alexandre Duchet would line up 2nd on the grid, showing a strong pace towards the end of qualifying, but unfortunately narrowly missing out on the TQ due to some errors. Alexandre went on to take the win in A1, and a 2nd place in A3, which was enough for him to secure the overall win on a tie break! Alexandre is thus a back-to-back champion in the stock class at the GP3F! Adam Izsay was on a mission all weekend, consistently putting himself in the top 3, as well as winning A2, and eventually ending up 3rd overall in this stacked field! French driver Steve Favrelle drove his X4’23 to a fantastic 5th place, And Stefan Schulz also made the A-final for the team, making it 4x X4’23 cars in the top 10!

The FWD class was dominated from start to finish by Jacques Libar. Jacques converted his TQ into a win with his X4F’23 car, clearly showing the super pace of the car with consistently quick laps in every run. Congratulations Jacques! Florent Jadot, Chris Grenz, Sebastian Gilbert and Jean Charles Angot also made the A-final with their X4F cars!

I want to thank the MRC Longwy club for a fantastic organization, great track, catering, and a great atmosphere in the pits! We are looking forward to next year!

Thank you all XRAY drivers for your good results and your support in our brand – until next time!