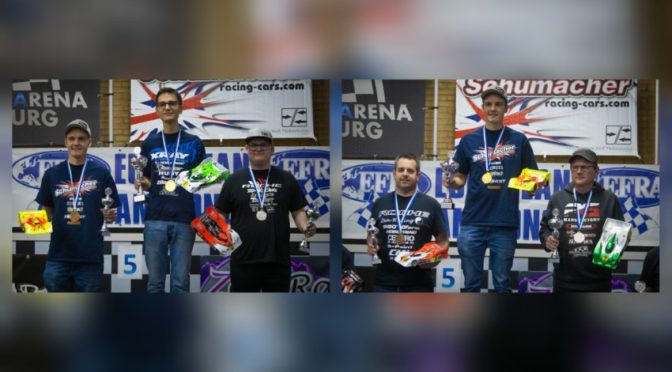 Alexander Hagberg started his quest for a seventh consecutive European championship title in his favourite class by immediately pulling a gap over Ollie Payne and then clicked off the laps unchallenged to take the leg one from Ollie with Joern Neumann having a lonely run to third. Leg two was a repeat of leg one at the very front, with Ollie just unable to challenge Alex, the two both capable of lapping at the same speed but Alex looking a little more comfortable at 100%. This allowed him to edge away, crossing the line to retain his title at the earliest possible opportunity at the end of leg two. Payne crossed the line in second with Freddy Sudhoff making his way up to third With the title safely in his pocket Alex opted to sit out leg three, presenting an opportunity for the remaining drivers to score a leg win to improve their overall position. Joern Neumann managed to get ahead of Ollie Payne early on, and a win combined with his third place in leg one would beat the two second places that Ollie had scored. Ollie eventually battled his way past Joern and proceeded to pull away to take the leg win and secure second overall, with Joern’s second place in the leg confirming his place on the overall podium. 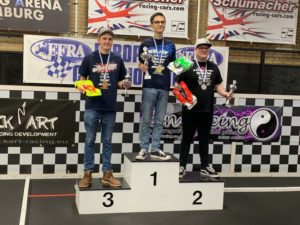 Joern Neumann led away from his pole position in leg one, then a small mistake on the opening lap presented Markus Mobers with an opportunity to make a move for the lead. This also allowed Mark Stiles and Louis Parker past Joern too, giving Markus the chance to build a lead while the rest of the field battled over second position. Neumann eventually prevailed to appear at the front of the chasing pack, but too late to present a challenge to Mobers who took home the leg win from Neumann and a hard charging Louis Parker in third. Leg two proved to be relatively uneventful, with Neumann taking a lights to flag win from Mobers with Stiles in third, meaning the title would be decided in the third leg. Neumann led leg three away, but was unable to shake the attention of Mobers who remained within one second of Joern for the first six minutes, unable to quite get close enough to make a move but not allowing him any breathing space either. Eventually Neumann managed to edge away as the pair carved through the traffic, crossing the line in the lead to secure his maiden European championship title in the 1/12th class. Markus finished second again to secure second overall, while Mark Stiles took third in the leg to ensure he would take the final step on the overall podium. 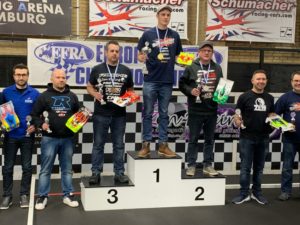