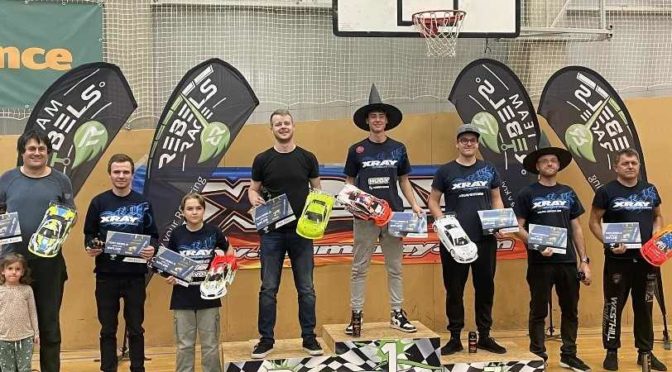 First round of Rebels race was held in beautiful city of Prague.

After entering the hall Saturday morning, I immediately recognized the big open track with a long straight. We had three practice rounds in which my cars worked perfectly, and I did just few setup changes and both cars were ready to race.

I was dominating the qualies with winning every single round of them in front of Simon Horak (XRAY) in stock and Jirka Vysin (XRAY) in modified.

First round of finals I won in stock, but I ended up finishing 7th in modified after our unlucky contact with Jirka. Second and third round of finals I made a mistake in stock which cost me a win, but in modified it was win in second and third final which put me to first place overall. Unfortunately, my teammate Jirka who finished 2nd in the second final made a mistake in the last final and he finished 5th overall behind our junior talent Maty Knopp (XRAY) who secured his 4th position with an awesome driving in the finals and Michal Blahovsky (XRAY) 3rd overall.