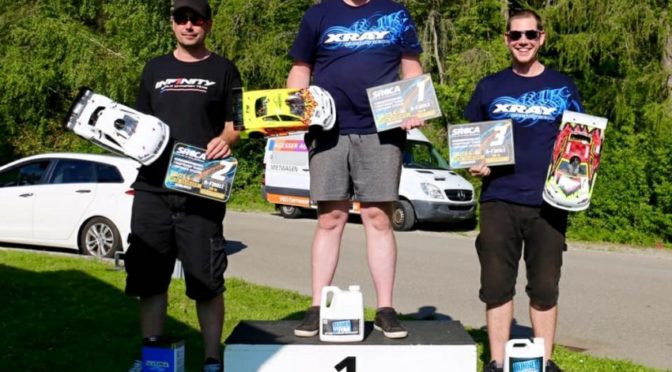 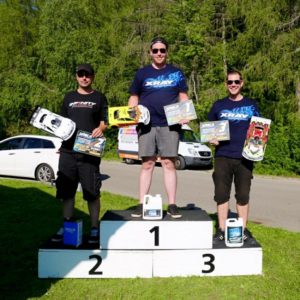 The 4th round of Swiss nationals was held on the technical track at Herblingen. Friday afternoon we had 5 rounds of free practice. My car was perfect and I was able to set the fastest lap.

I struggled a bit with the setup during the hotter conditions. The front tires became after 2 minutes too hot and the car was difficult to handle. So I could not secure the TQ, but I was still on the 2nd place behind Marco Rizzo. That meant 2nd spot for the 45 minutes long A-main. Overall we had 6 XRAY NT1 in the A-main!

Marco Rizzo, Niclas Scherer and I pulled away from the rest of the field. My teammate Traugott Schar (started on 6th place) was closing in after 4 minutes. But unfortunately an engine issue stopped his race. The battle for the first 3 positions was exciting with many position changes. I tried to save my tires to make the all four tire change at 25 minutes mark to have the fresher tires in the end of the race. The rest of the field changed the tires after 20 minutes.
Niclas had also engine issues and my teammate Stefan Wuthrich was now on the 3rd position. Marco Rizzos mechanics have made a perfect tire change and I was from now on under pressure.

5 minutes before the end I was 1 second behind Marco and he slowly ran out of tires. 4 Minutes later he was on the rims and I was able to pass him and win the race! Stefan finished on 3rd place – congratulations to both of you!

The last race will be in 4 weeks at Langenthal. In the overall standing I’m now 40 and 60 points ahead of Stefan Wuthrich and Traugott Schar and I need a solid result to defend my championship from last year.

At least i would say thank you to my girlfriend Sue and to Kevin for the perfect pit work and to T+M Models for the perfect support and help to make my package faster every race.